Last Friday the Cubs dealt Alfonso Soriano to the Yankees for a class A pitcher.

Soriano came to the Cubs during the winter of 06-07 as part of a spending spree by GM Jim Hendry.  Soriano was able to turn a 40-40 season into an eight year, $133 million contract.

Early on Soriano was good for the Cubs.  He helped to lead the team to back to back division titles in 2007 and 2008.  There were times when his bat got red hot and he could carry the team.

Then age caught up with him.  His legs were gone, but his contract wasn't.  So the Cubs had to make the best of it with him.  The last couple years he did improve his defense, and he had a career high in RBIs last season.  But he wasn't worth the $18 million per season the Cubs were paying him.

I checked back in my collection and counted 132 different cards of Soriano.  As a major star on the team, he showed up in pretty much every set released and in most of the accompanying insert sets.  That would account for so many cards of a player that I wasn't seeking out.

I decided to make a tile of my Soriano Cubs cards.  As soon as I saw that there were 132 cards, I knew exactly how I would make the tile.   A savvy collector should recognize the number 132 as the number of cards on a full sized printed sheet of baseball cards....12 rows of 11 cards each.

Here, then, is a full sheet of ex-Cub Alfonso Soriano. 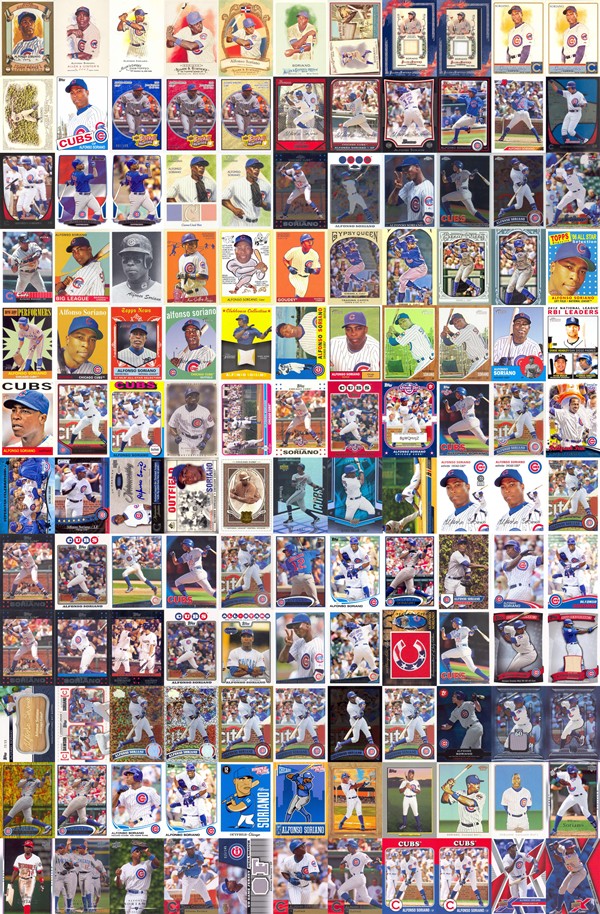