I'm waiting for my main A&G shipment from Brentandbecca, but several other minis and relics have arrived.

The Cubs have four players on the A&G relics checklist, but I've got five cards to show--you'll know why in a little bit.

The biggest change with the relics would be the big cards...A&G calls them full sized relics.  The rest of the world calls theme your basic relic cards.  Traditionally, A&G had mini relic cards that were framed inside a full sized card.  It was the only product I'm aware of that did the relics this way and in my mind it made the Ginter relics unique, a bit more special. 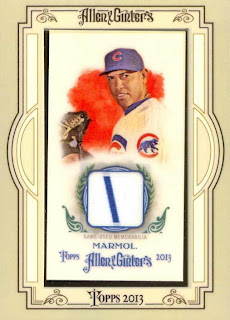 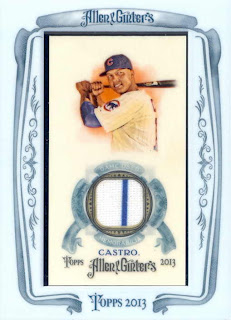 These cards of Carlos Marmol and Starlin Castro are the traditional Ginter relics.  This is the first time that the card frames had different versions.  I'm not aware of any reason for the blue and tan versions.  Anyone got an explanation? 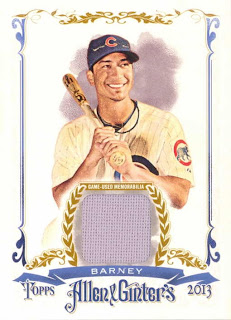 ...and it looks like a relic card from any other set.  I'm sure these are cheaper to produce than the framed minis, but I hope Topps doesn't go exclusively to the full sized relics in the future.

That's three of the five relics... 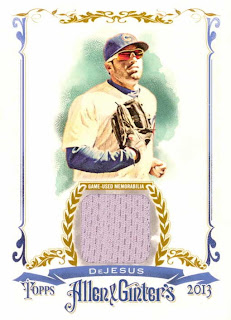 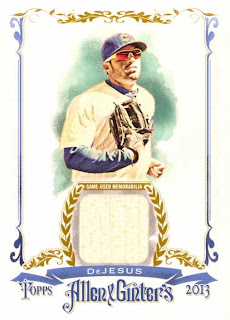 ...and here are the final two.  They're both David DeJesus, but the card on the left is a jersey while the one on the right is a bat.  Very odd that a player that didn't get a card in the Ginter base set has two different relic cards.

Chasing these five relics was a much easier task that what I had to do the two previous years.  In 2011 there were 12 Cubs relics and in 2012 had 10 to grab.  This year's five is a much more reasonable number.