Dumb Move Gets You DFA'ed

Some day I'll be able to tell my grandchildren that I was at Wrigley Field the day Julio Borbon made his final appearance as a Cub on August 2, 2013

Julio's day started well.  He was pinch-hitting to lead off the bottom of the ninth with the Cubs trailing the Dodgers 6-2.  Recently-traded ex-closer Carlos Marmol was on the hill for LA, greeted by a rousing chorus of boos by the Wrigley faithful, including your's truly.

Sucky Carlos did what we expected him to do--he gave up a lead-off double to Borbon.  The Cubs are down by four, but with Marmol on the hill, anything could happen and the top of the order is up next.

Again, Marmol does what we had seen time and time again--he throws a pitch into the dirt and it gets away from the catcher slightly.

So what does Mr. Borbon decide to do?  With the Cubs trailing by four, needed lots of runners in the final inning, he decides the ball is far enough away to take third.  And of course, he's nailed...out.  I thought it was a pretty fundamental thing to not take chances in the last inning when your team needs lots of runs.

But 'ol Julio did a dumb thing and later that day, the Cubs designated him for assignment.  I commend Theo and Sveum for sending a strong message to the team and the players throughout the organization--play smart or you're gone.

I hope that Topps wasn't planning to waste a card on Borbon in the update set, so I've created my version of Julio Borbon's card. 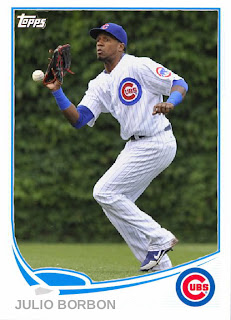 Notice how he looks to be dropping the ball---a fine metaphor for his time with the Cubs.