So yesterday, after years of hard work and paying his dues, Ryne Sandberg attained his goal of becoming a big league manager.  The plan was for him to be the Cubs manager, but that's not the way it worked out.  Instead of blue pinstripes, he's wearing the red pinstripes of the Phillies.

I suppose in some ways its better that he didn't become the Cubs skipper.  His Cubs legacy won't be affected by any lack of success on the bench--we just get to remember him for his on the field accomplishments.

But it doesn't look right to seem him in anything other than blue.  That's something I'm just getting used to.  It reminds me of Don Mattingly's situation...who thought they'd see him in a Dodger uniform. 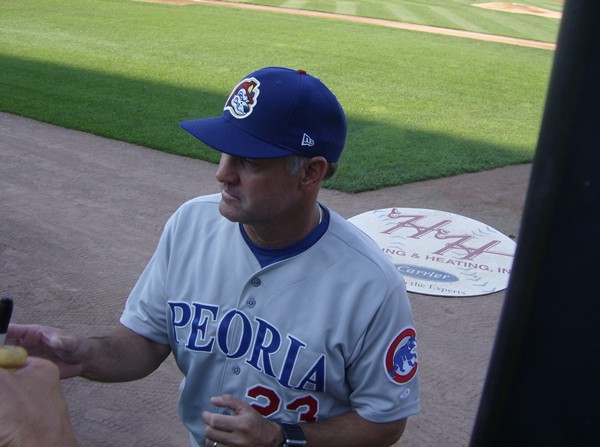 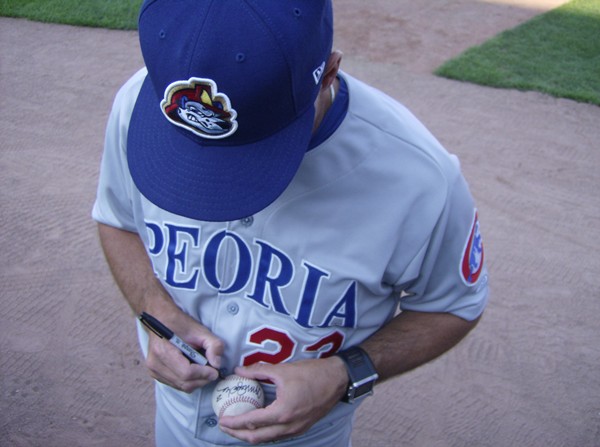 These are pictures I took in 2007 when Ryno began his managerial career with the Peoria Chiefs.  WW Jr. and I each got an autograph--me in his autobiography, WW Jr- a ball.  I've got an entire post on that adventure here

I've got more Sandberg cards in my collection that any other player...606 cards.  I wanted to make a tile to go with this post, but I didn't want it to be 606 cards big.  So instead, I picked one card from each year, starting with his rookie season of 1982 and going up to 2013.  The tile ends up one card short, because there were no cards of him from 2000, at least according to Beckett.

I also did my best to not repeat any brands.  The only exception is that I had to use team-issued cards for 1982 and 1999 since they were the only cards available for those two years.