Adventures On the Road to Wrigley

This is a long one, but I think you'll enjoy the read!

In mid-June I wrote this post about me getting free tickets to the Cubs game on August 2.  Even better than free tickets is free baseball cards, which I was to get at the game as the Cubs were giving away their third of four Archives sets.

Well.....things didn't go quite as planned, but they eventually did work out.

The plan was this:  pick up friends, hop on Indiana tollway and head to Wrigley.  I got to the friend's house at noon Michigan time, which would have us arriving at Wrigley around 1:00 p.m. Chicago time--two hours before the game.  I wanted to get there plenty early because we were going to be parking around the ballpark (which is very limited and very expensive, though the friend offered to pay for parking).  But even more important, I wanted to get there early to guarantee that I would be getting the giveaway cards, since they were only handing them out to the first 10,000 fans.

Things were going well as we flew down the expressway until we got near South Bend.  All of a sudden, traffic just stopped.  Since there weren't any orange signs warning of construction, we guessed there must have been an accident.

Mrs. WW fired up her trusty Ipad and got the scoop....at 10:30 a.m. a triple-trailer UPS truck had rolled over and was blocking the lanes at mile marker 69.  Here's an article with a little more about the accident. 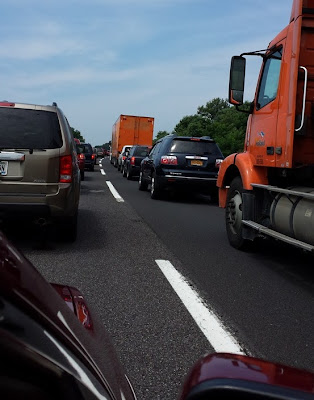 It was about 12:30 p.m. and we were at mile marker 80.  Two hours after the accident, traffic was still backed up over ten miles, and I was smack into it.  Because it's a tollway, there are very few exits along the Indiana Toll Road.  That meant no real way to escape the mess.  We were pretty much doomed to just crawl our way through.

And crawl we did.  Very slowly, then stop.  Minutes later, crawl again and stop.  I watched in horror as the arrival time on the GPS kept getting later and later.

It ended up taking us about a hour and 45 minutes to get past the accident.  We still had another 90 miles to go to get to Wrigley, but with a little luck and a little extra speed, we could make it just by game time.

We were making good time until we exited the Chicago Skyway and merged onto the Dan Ryan Expressway....or as it was on Friday afternoon, the Dan Ryan Parking Lot.  Rats...more traffic!

As we made our way, Mrs. WW was checking traffic and found that according to Google Maps, going downtown to Lake Shore Drive was going to be quicker than staying on the Ryan and Kennedy.

So we took that route, angering the GPS lady...Recalculating, she said in a derisive tone.

And as soon as we got onto LSD, more taillights.

Google Maps was not aware that Lollapalooza was going on in Grant Park.  We crawled all the way to the S Curve as the arrival time on the GPS crept past the 3:05 game time.

The only good thing about being late is that traffic around the ballpark wasn't too bad...everyone was already watching the game!  We lucked into the last space at a parking lot under the El along Sheffield, only two blocks south of the park.

They lost the game 6-2, though we did get to see Don Mattingly get ejected and bump an umpire.

...as we were leaving after the game, I'm checking around the empty seats to see if anyone dumped their card set.  I was talking to my friend as he too was looking.

And then two ladies, still in their seats, overheard our conversation and said, "Do you want our cards?  We won't ever use them."

The clouds parted and the angels sang Hallelujah!!  The day was finally looking up.

I thanked them profusely as they handed us their cards and the bonus card albums, too... 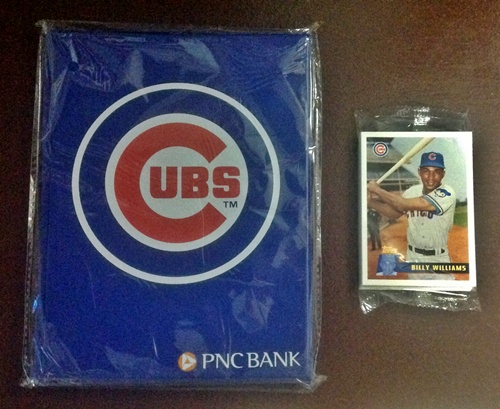 ....and all was now well with the world!

I'll have a look at the cards tomorrow.
Posted by Wrigley Wax at 9:00 AM