By now, most of you are aware of the gimmick Topps pulled off with this year's Allen and Ginter set...putting a 1/1 glossy card inside the box tops of 350 boxes...one for each base card.

Topps gave a very cryptic hit about the surprise in this tweet...

...on August 7.  But it took three days before the gimmick came to light, and it was by accident.  Super case-break Brentandbecca was cutting up box tops, to be used as packing material, when he found the 1/1 card of Marco Scutaro.  He found two more among his hundreds of boxes.

And the hunt was on.  You wonder just how many ended up in the trash from the first several days of ripping before the hidden treasures were discovered.

Of course, I was on the lookout for the Darwin Barney card.  On August 20 it was listed on Ebay.  I immediately put it on my watched item list, set my snipper, and I watched.  Coming into the final day, the top bid was only $2.25.  I was cautiously optimistic that I could get the card for a reasonable price.

On the final day of bidding, the price sky-rocketed.  The card sold for $93....waaaaay above what I was willing to pay. 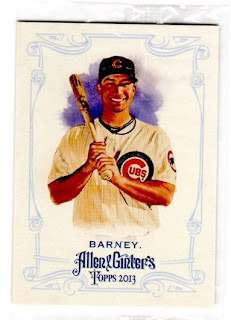 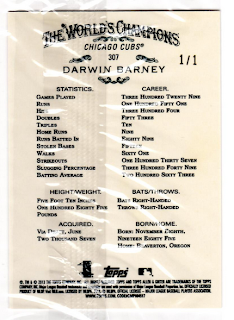 I will have to settle for pictures of the cards borrowed from the listing.
Posted by Wrigley Wax at 9:00 AM