As a team collector, I'm always on the hunt for oddball Cubs team sets.  A couple weeks ago, I found one on ebay I hadn't seen before.  Teamsets4U had a listing for the Cubs team set from Fleer's 1975 Pioneers of Baseball.  I checked the listing and saw that there were four cards in the set. But the price for the four card set was $11.00 plus $2.50 for shipping.

That price was too steep for me.  I've used the checklists at Teamsets4U from the time I got back into collecting in 2008.  I've even made a few purchases.  But I wasn't going to pay $11 for only four cards.  Instead, with a slight twinge of guilt, I headed to Sportlots.

Each of the four Cubs were available, and even better, all from the same seller.  And the cost...a bargain (at least compared to Teamsets4U) at $2.73 shipped.  Saving nearly $11 removed any feelings of guilt.

The cards are an odd-shaped 2 1/4" x 4".  They're not nearly as colorful as Fleer's World Series set, but since the pictures were going to be black and white, the lack of overall color makes sense.

Here's what the wax pack for the cards looked like... 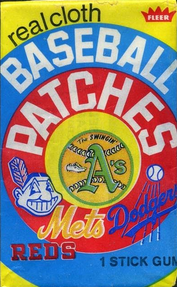 ...notice anything missing?  The cards were actually inserts for the patches set.  For 10¢ you got a cloth team pennant, patch, a card, and a stick of gum. 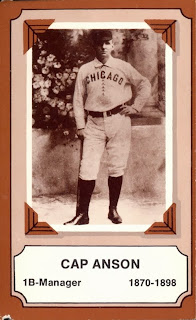 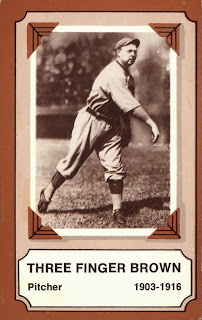 Here are a couple well-know early Cubs (or in the case of Anson, White Stocking).

The cards don't list a team, so when Teamsets4u put their team set list together, I'm not sure what criteria they used because... 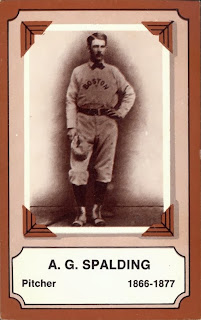 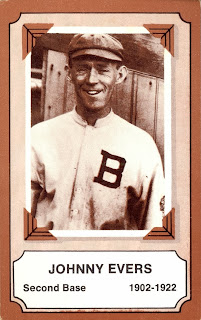 ...these two are listed as Cubs, but both of them are in Boston uniforms.  Spalding's time with Boston was while the Red Stockings were a part of the National Association.  He moved to Chicago in 1876, when both the National League and the Cubs had their start and picked up 47 wins as the Cubs won the pennant.  He pitched in only four game the next season.  His attention soon turned to his business enterprises.

Evers is obviously more well-known as a Cub, so it's odd that Fleer shows him as a Brave. 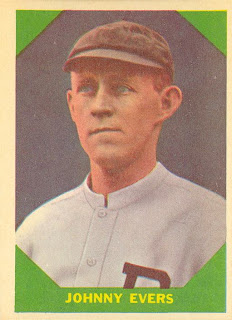 They did the same thing in an earlier set with a picture that has a similar look.

Here's a look at the back of the cards 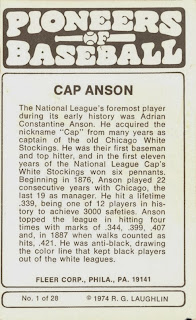 ...pretty plain looking black and white.
Posted by Wrigley Wax at 9:00 AM