Topps was busy in the late '80s and early '90s working with a host of retail chains to produce special 33 or 44 card sets.  In past posts I've featured cards from Ames, Circle K, K Mart, Kaybee, Revco, Rite Aid, Toys R Us, and Woolworth.  I've also shown the cards Topps made with Drakes Bakery.

Drake wasn't the only food company Topps worked with.  They've also paired with Quaker Oats and Purina, each time a one and done set.  Today, I've got one of  those sets, the Ralston Purina set.

The Topps/Purina set came out in 1984.  The set was made up of 33 of the big stars of the time.  Twenty of the 33 players ended up it Cooperstown, so there are some big names.  Unfortunately for me, none of the players were Cubs.  But to give you a look at the card design, here is a future Cub... 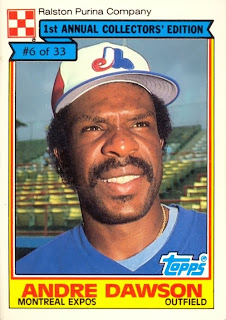 ...Andre Dawson.  The banner at the top says 1st Annual Collectors Edition.  That was a little optimistic, as the set ended up the first and only collectors edition.  Purina did later produce sets with MSA, but they lacked an MLB license, which means they lacked logos.

The cards were given away in boxes of Cookie Crisp and Donkey Kong cereal, coming four to a package.  You could also send away for the set in panel form.  These didn't come in a box, so I had to create my own. 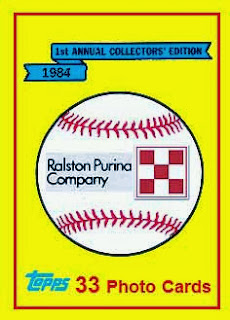 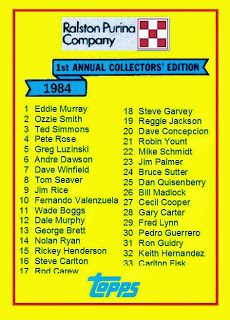 Since the set didn't include any Cubs, I thought I'd fix that mistake... 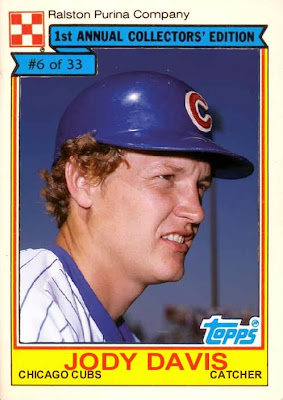 ...with this card of Jody Davis.  Jody was the Cubs catcher throughout the early and mid-Eighties.  He kinda gets lost in the Sandberg, Sutcliffe, Cey, Durham shuffle. but he was an important part of those teams.  Most of these '80s extra sets ignored him, so thought I'd give him a card.

Tomorrow I'll take a look at the Topps/Quaker Oats set.
Posted by Wrigley Wax at 9:00 AM