When I put my Post sets together, one card I didn't need was the 1963 Ron Santo card.  I had picked it up a couple years earlier when I was getting the Post cards of Ernie and Billy for the player collections. 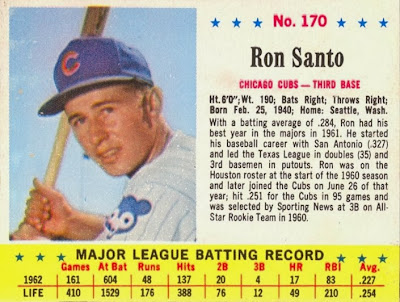 As I picked up more '63's, I noticed something odd about the Santo card.  It was about a quarter inch shorter than the rest of the cards.  I chalked it up to a bad cutting job when little Bobby was cutting the card off of his box of Raisin Bran in 1963.

When I put the cards in the binder, I got a good look at the Santo card next to all the others and realized that it wasn't Bobby's fault.  It was mine.

Instead, it was a very similar, but slightly smaller Jello card. 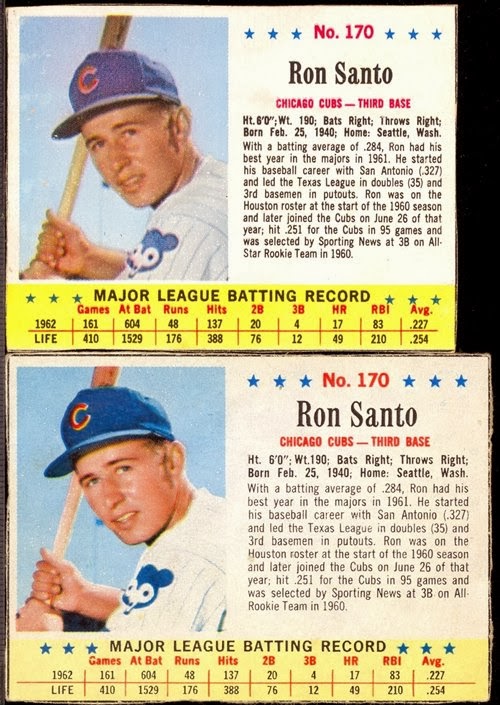 In 1963 the same cards were issued on boxes of Jello, but the Jello cards were ¼" shorter than the Post cards.  This led to a few design changes, most of which are hard to detect when looking at the cards.  The font size on the Jello cards is slightly smaller, as are the six stars at the top.  The picture of the player wasn't reduced; its the same size as on the Post cards.

The easiest place to spot a Jello card is on the far right side of the yellow box with the player stats.  On the Post cards, the red line that separates the '62 and lifetime stats extends quite a bit in front of the 1962 and past the batting average.  On the shorter Jello cards, the red line starts right at the 1962 and ends just past the average.

I've got the longer parts circled.

So learn from my mistake.  If you want a 1963 Post card, look for the long line.  And a Jello card--short line.

By the way, there were both Post and Jello cards in 1962 also.  They're a little easier to distinguish. 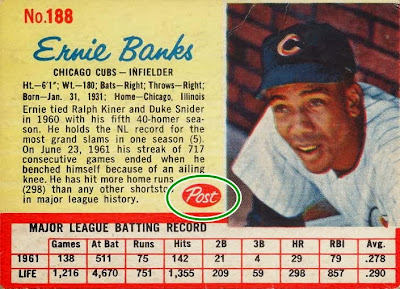