I thought I'd give an update on the sales and prices of a few Darwin Barney cards... 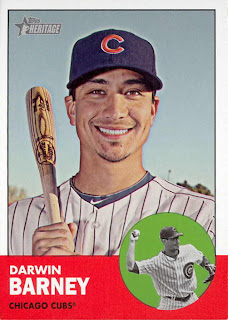 2012 Heritage Super Short Print No Position...The fake error card has seen the market completely dry up as the price of the card has plummeted.  Over the past two months four different sellers have had the card up for sale and not a single one of the four was sold.  They've been priced from BIN of $49.99 to $27.95.  But even at those prices, which are well below the $92.25 average of the 22 that have been sold on Ebay, there have been no takers.  I guess all the master set collectors and team collectors have finished with the set.

2013 Heritage Venezuelan.. This is the card that I've contended is more rare than the '12 SSP card.  To date, only nine of these have been offered on Ebay, which is significantly less than the 34 '12 cards that have been listed.  And the average price of the Venezuelans.... a mere $3.80 per card. 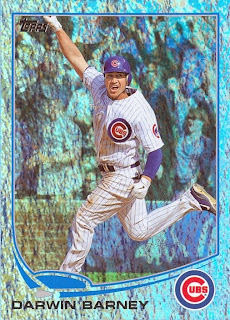 2013 Update Sapphire...I don't have to guess the print run of this card...it tells me...there are 25 of them.  And to date, how many have been offered on Ebay?  Only one!  Lucky for me I bought it.  Sometimes a wait a little on these, hoping for the price to come down.  I'm glad I was impatient with this card.  So where are the other 24 copies?  I don't expect that all of them will show up on Ebay, but it seems very odd that only one has surfaced.

Does this mean that the Update sales are down?  Maybe.

Or is the collecting world becoming filled with Darwin Barney collectors that keep the card rather than listing it?  Doubt it!
Posted by Wrigley Wax at 9:00 AM