The Travis Wood All Star Card That Topps Forgot

But there were 78 players named to the two squads, leaving 18 players without an All Star card.

The Cubs had only one player named to the team, and it was one of those charity picks---you have to have a player from each team.  Travis Wood was that pick.  His win-lose record wasn't too hot (6-6) but he went into the break with an ERA of 2.79.

Topps must not like charity picks because Wood was one of the 18 All Stars getting the Update Card snub. 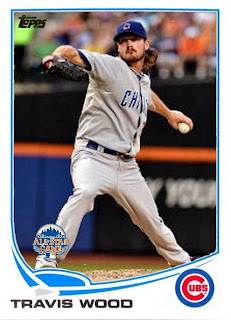 And if you want to do any unsnubbing yourself, here's a list of the 18 All Stars without an All Star card: