The Seller Didn't Quite Get the BIN

For the past two seasons the Cubs have had pictures of Topps cards on their game tickets.  I've picked up most of the Billy, Barney, and Ernie cards from last season.  This year I've got the Barney and a couple Billys, but no Ernies.

I thought I'd see if any were available and a quick Ebay search found a seller that just listed all six of the Ernie cards.

It was nice that I could get them all at once.

It was not nice that the seller was a bit delusional.

It was nice that the seller was not completely insane.

Here's the scoop--the seller listed the tickets as an auction with a Buy It Now option.  And the BIN price--a mere $150!  Imagine, for only $25 a piece you can be the proud owner of six tickets to games that were already played.

These are from Opening Day...you gotta start with Ernie, and game #14...his uniform number

Six nice tickets to add the the Ernie collection.

And by the way, when the president is from Chicago, 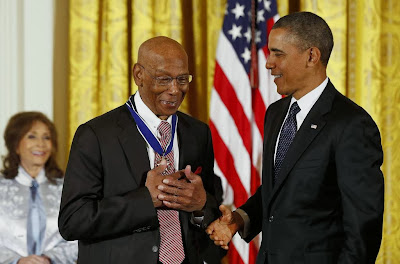 Chicagoans get the Medal of Freedom.

I bet he'd trade the medal for a World Series ring.