Billy's Autograph and Who Else??

Here is post #3 of my recent Billy Williams autographs.

In 1984 the Cubs made the post-season for the first time since 1945.  The whipped the Padres in games 1 and 2 of the NLCS at Wrigley.  One more win and they were off to face the Tigers in the World Series.

Of course that one win never came.  The Padres swept the last three, in part because of that #%&&#@ Steve Garvey.  With apologies to Night Owl and GCRL,  I was never a big Garvey fan during his time with the Dodgers...he seemed to phoney and full of himself for me...a pretty boy, not a ball player.  His NLCS performance cemented my dislike for the guy.

So take a look at my Billy autograph.. 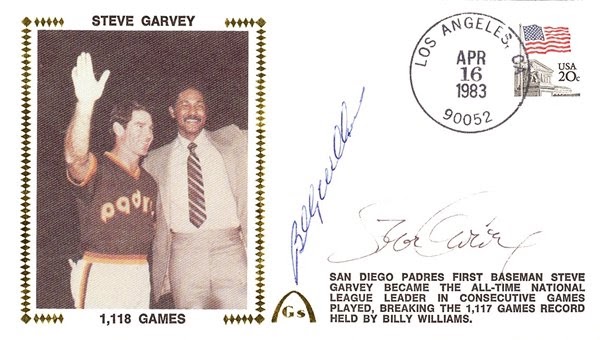 This is a postmarked postcard from the day that Steve Garvey broke Billy's NL consecutive games streak.  I guess it was a nice touch on the Padre's part to have Billy at the game.  The Cubs had a big celebration when Billy set the record, but I don't think they brought in Stan Musial, who's record he broke.

I've been hemming and hawing about getting the postcard for a while. But once I picked up the Perez Steele autos, I figured what the heck and went after this one.