Can you stand to look at another autograph of Billy Williams?

I picked up #23 last week and it too has a unique picture on it. 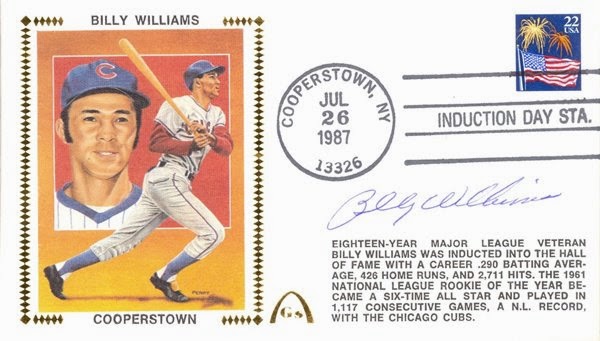 It's another postmarked envelope, this one from July 26, 1987...the day that Billy was inducted into the Hall of Fame.  The two pictures are from different era....the swinging picture looks to be from the mid-late 60's (though I'm a little confused about the red sweatshirt he's wearing under his jersey.  The portrait would be from 1972-1973.

The signature is in pen, but I think alot of signed items from that era were in pen.  Sharpie signatures were still a few years off in the future.

I'm still on the hunt for three more signatures to give me a nice 26 autographs of #26.
Posted by Wrigley Wax at 7:00 AM