Two days ago I showed several scored scorecards. Sharp-eyed reader Eric noticed that on the scorecard from 1969 the Cubs had four catchers listed. In today's major leagues, any GM that would put four catchers on the roster would be considered insane. Forty years ago it was more common for teams to carry three catchers. But even for that era, four catchers on the Cubs roster was unusual.

I decided to do some digging around to see if I could figure out the Cubs catching situation throughout the 1969 season. I used three books on the ill-fated team along with the Tribune archives to put a timeline together.

When the Cubs broke camp in April, they were carrying the traditional three catchers. Ironman Randy Hundley was the starter. Gene Oliver and rookie Ken Rudolph were the backups. The Cubs had signed veteran Bill Heath over the winter, but he lost the last roster spot to the younger Rudolph, who had a good spring with the bat. Heath was sent to the minors.

Hundley got a majority of the playing time, which became a real sticking point later in the season. Skipper Leo Durocher drove his starters into the ground and by September they were dead, and so too the Cubs pennant hopes. 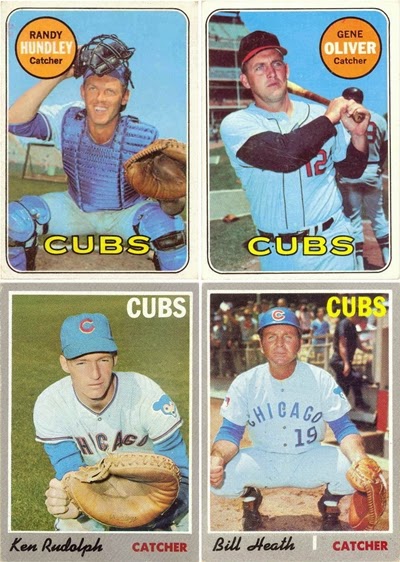 The first change to the catching lineup occurred on May 9. Early offensive slumps led the Cubs brass to add another bat to the bench and send out a pitcher. The pitching staff was left with nine arms. Can you see a team today going with only nine pitchers?

The bat that was brought in was catcher Bill Heath. Seemed like an odd choice, since Heath was a lifetime .236 hitter. But he was hitting .300 in AAA, so the Cubs thought he might help. His addition gave the Cubs their fourth catcher.

In late June the Cubs needed another pitcher, so Gene Oliver was sent to AAA. This took place on June 29, the date of my scorecard, Billy Williams Day. Oliver's stay in the minors was going to be temporary.

The team knew that Ken Rudolph was going to have to spend two weeks on a military assignment, and Oliver would return to the team and take Rudolph's spot.

That took place on July 11.

When Rudolph returned to the team in late July, the four catchers stayed on the roster.

Needing to make another move, on August 11, Rudolph was sent to the minors (he was sent to AA, probably to make sure he would get plenty of playing time). He would have spent the rest of the season there, except for an injury.

On August 19, Ken Holtzman was throwing a no-hitter against the Braves. Bill Heath was catching as Randy Hundley had hurt his ankle. Late in the game, a foul tip caught Heath on the hand, breaking a finger. Gene Oliver finished the game behind the plate. After the game, Heath was put on the DL and Rudolph was recalled. Heath stayed with the team the rest of the season, but wasn't activated. He never played in the major leagues again, his final game being the Holtzman no-hitter against the Braves.

I don't have any cards of John Hairston, so this picture from the Tribune will have to do.

The next move was made on August 25 when rookie outfielder / catcher John Hairston was brought up. Two days later Gene Oliver was deactivated and named a coach. This left the Cubs with Randy Hundley and two rookies. That meant that and already tired Hundley was going to spend the rest of the season handling all the catching duties. 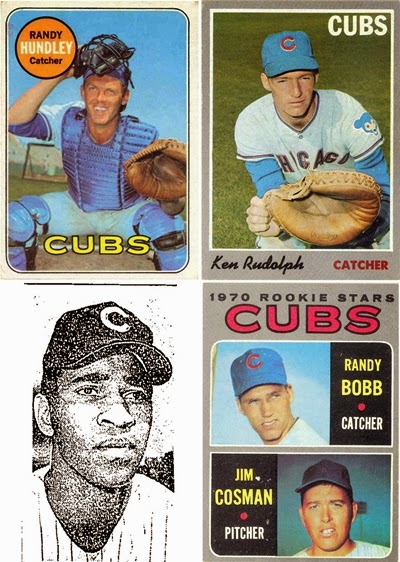 When Tacoma's AAA season finished in early September, several players were brought up. Among them was catcher Randy Bobb. Now the Cubs had four catchers again, but three were rookies. This was the way the season ended.

The total tally of catchers was six. Randy Hundley played in 151 games. Ken Rudolph and Bill Heath were in 23 games, Gene Oliver only 23, and the late season callups of Hairston and Bobb had a total of four games between them.

Clearly Hundley was the workhorse. But it took a toll on him. He lost so much weight over the season that he needed to wear suspenders in September to keep his pants up.

I guess that begs the question: If you're going to carry three or four catchers, why not use them? Only Leo knows the answer.

Here's how the final numbers worked out

Other than Hundley, it's not very pretty.

I guess they needed a fifth catcher.