My run of schedules of Cubs minor league affiliates is a bit thinner--I think it is one.

But thanks for Jedi Jeff at 2x3 Heroes, I've doubled my collection with this: 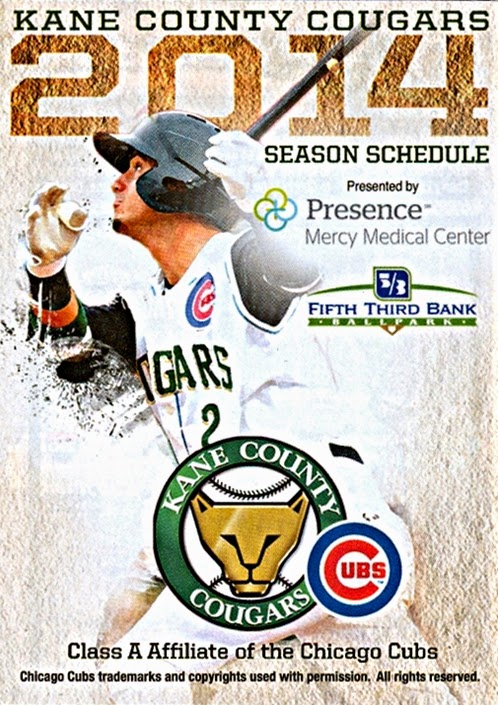 I thought it was a brilliant move for the Cubs to move their low A affiliate up from Peoria to Kane County.  Sure seems like a no-brainer to me to have your farm teams as close to home as possible.

Before I moved to Michigan, I was in the NW burbs of Chicago.  The Cougars were about a 45 minute drive from our house.  We would take in one or two Cougar games a year.  With parking being a buck and tickets going for just a few more, it was a much more economical way to watch a ballgame compared to going to Wrigley.  We always enjoyed our times there.

The schedule tells me that parking has gone up (five bucks now) and the tickets prices are higher too.  But there are usually deals to be found and its still a lot cheaper than Wrigley.

I don't plan to get to a Cougars game this season, but I do have four Midwest League teams (West Michigan Whitecaps, Lansing Lugnuts, South Bend Silver Hawks, Fort Wayne Tincaps) within a 90 minute drive, so catching a Class A game is still doable.

I may have to check the schedule and see when the Cougars are in my neck of the woods.  And thanks to Jeff, I've already got the schedule in hand.
Posted by Wrigley Wax at 7:00 AM