Added A Previously Unknown (to me) 2014 Topps Barney Parallel

I thought I was down to chasing just one more Barney 2014 parallel, the clear acetate /10.

But during one of my daily Ebay Barney searches, I saw a parallel I'd never seen before. 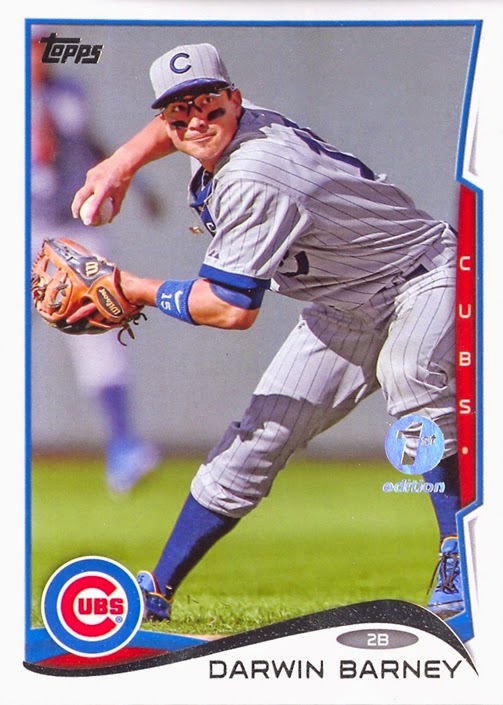 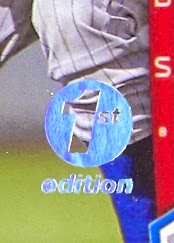 According to the seller, the card is from the First Edition set.  Ten of these factory sets were made and given away as prizes for Topps 2014 Power Players Spring Training Access Sweepstakes. The seller must have won a set because he was a boatload of these (and he's making a killing on them too.  If he can sell 600 cards for just $5 each, that's a $3,000 prize he won.  Many of the cards are going for much more that $5).

According to the contest rules, those who got an access pass in series one hobby boxes had until December 31, 2014 to redeem them.  In January, Topps chose the winners from among those who redeemed passes.  I suppose that's why I hadn't seen the card before...it's been out for just a little while.

Since only ten of the sets were made, that makes this card as rare as the clear acetate card I'm still hunting.  The 1st Edition cards was a BIN and I snapped it up almost immediately.  I didn't want to see it pass by.

Actually, I'm going to go out on a limb and say the 1st Edition cards will be harder to find than the clear ones.  The reason...they come as part of a factory set.  I'll bet some of the winners won't want to break up the set, which will cut down on the supply.

My 2014 parallel collection is now up to 23 cards...with one more to go.  Before I get to the tile, I was playing with a GIF maker and here are all 23 in GIF form