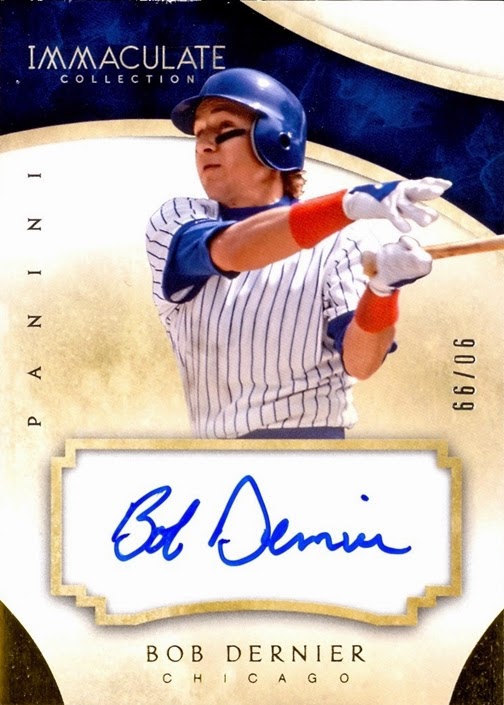 I tend to stay away from the unlicensed stuff, but this was a card that I couldn't pass up.  I believe that it is the only certified autograph of Bob Dernier as a Cub.  Well, kinda a Cub.  The logos are gone and it just says "Chicago" but we all know that this is a Cub.

The card comes from Panini's 2014 Immaculate Collection set.  I know nothing about the set, and didn't bother to look into it at all.  I stumbled onto the autograph card, bought it, and moved on.

Dernier came to the Cubs before the 1984 season and became the center fielder and lead off hitter.  Harry Caray called Dernier and Ryno (the number two hitter) the "Daily Double."  They both had great seasons in 1984.

For Ryno the season launched him on a trajectory towards Cooperstown.  It wasn't so for Dernier, though.  His 1984 season was the peak of his career.  He had lifetime highs in games, at bats, runs, hits, doubles, triples, RBIs, and stolen bases.  He won the gold glove and even got some action in the MVP voting.

He spent just four years with the Cubs before heading back to the Phillies to finish his career.  But despite the brief stay, he is a fan favorite and usually attend the Cubs Convention each January.
Posted by Wrigley Wax at 7:00 AM