I was finally able to add one of the missing two 2014 Topps Barneys to my collection... 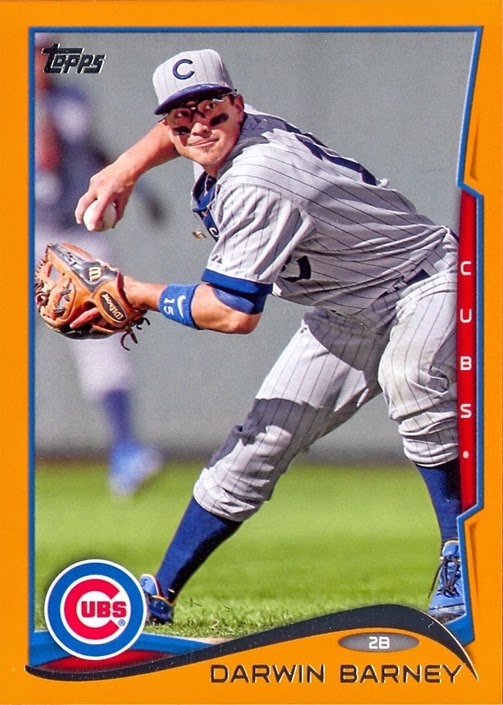 Doing a little math (  660 cards in the set x 199 copies of each card divided by five cards per pack) and I come up with 26,268 hobby sets made.  I've seen it argued that these /199 are more rare than you'd think.  Many of the hobby sets are bought by collectors and never opened, so the orange cards in them never see the light of day.  Another argument for the scarcity of these is that even if the set is opened, the orange cards are not sold since then the box isn't complete.

I've only seen one orange on Ebay, and that was months ago, and I didn't get that one!  I found mine on Checkoutmycards.

I'm inclined to agree with those arguing that the orange cards are not as common as you'd think.  To have only seen two out of the possible 199 in several months says to me they are tough to come by.  I'm happy to finally have one.

This card brings my Barney 2014 Topps total to 22 different variations. The only one I'm after now is the clear acetate version.  Its been almost a year and I've only seen three of the ten show up.  I'm not holding much hope of ever finding one, but I'll keep up the hunt.