For the first time since December, the Cubs had a player included in the Topps Living Set.  I ordered the card and Topps did a quick job of getting the card to me. 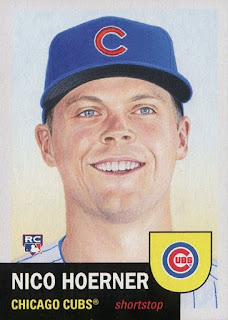 Nico Hoerner, a guy with all of 20 MLB games under his belt, gets included.  The print run for his card was 3,523.

While I like Hoerner and hope he has a long and productive career, he has no business being included in the Living Set.

I don't like the direction that Topps seems to be taking with the set.  Print run numbers are down, so they add more prospects, figuring that prospectors will buy the cards in bulk, gambling that the player becomes the next Mike Trout.  But that waters down the Living Set, which I thought was supposed to be for the stars of the present and past, with an occasional rookie sprinkled in.

It has instead turned into a money grab.  Case in point - Willie Mays card from last month had a print run of 4,787.   A few weeks later, Dodger prospect Gavin Lux, with all of 11 games in the big leagues, is included.  His card sells 6,303 copies.  Gavin Lux outsells Willie Mays by 33%.  I doubt that Lux' career will be 33% better than Willie Mays.
Posted by Wrigley Wax at 7:00 AM