With my quest for Cubs certified autographs finished (I think/hope!), I've turned my attention to getting cards from some of my favorites from my younger day.  The mid-70s were the years when I probably watched the most Cubs games on WGN and spent the most money on baseball card packs.

The Cubs teams then weren't very good.  By 1974 most of the '69 team had been traded away and the team was in rebuilding mode (sound familiar??).  Among my favorites from the era were... 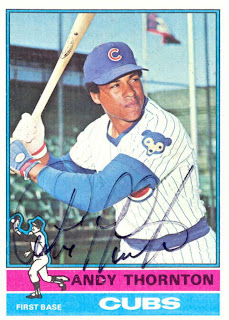 ....Andy/Andre Thornton.  The Cubs got Thornton in a trade with the Braves that sent Joe Pepitone south.  He was the Cubs starting first baseman from 1974 - May, 1976.  He hit for a decent average and was one of the few power hitters in the lineup.  He got off to a slow start in 1976 and in May he was traded to the Expos.  I was very disappointed to see him go.

The '76 set is one of my favorites because so many of the pictures show the Cubs in their home uniform (though mostly spring training shots).  I don't know why, but Cubs cards always seem disappointing to me when they show the road uniforms. 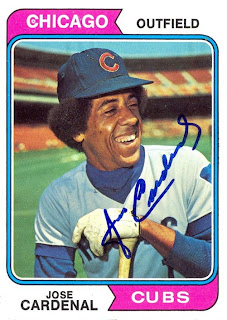 ....Jose Cardenal.  He was the flash on an otherwise pretty boring team.  The Sox fans in the house considered him a hot dog....and he was.  But he always hit for a high average, played a decent center field, and had a super funky 'fro.  The picture on the card really seems to capture the fun-loving hot dog Jose. 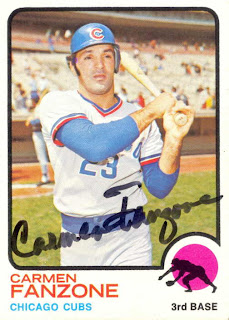 ....Carmen Fanzone.  Usually I don't have good memories of career .224 hitters, but Fanzone is different.  Ten-year-old WW got Carmen's autograph at Wrigley Field in 1972 (I've got the whole story here), and that puts him among my all-time favorites.  I went with this card since the photograph is from 1972.

All of these cards came from Ebay and were five bucks or less.  For the price of a few packs of today's cards, I got a card signed by some of my favorites.  Money well spent, if you ask me!
Posted by Wrigley Wax at 9:00 AM