Today we take a look at the newest of the Flick Friday movies, 2011's Moneyball.  Even if you haven't seen the movie, I'm sure you're all aware of the topic--Oakland A's GM Billy Beane's use of sabermetrics to build his team. 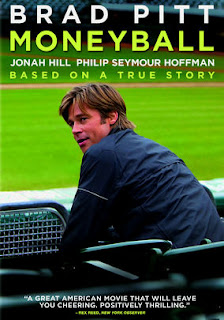 Baseball movies tend to attract a male audience, so Hollywood has to throw something in the movie for the ladies.  In Moneyball, it wasn't something, it was someone, Brad Pitt.

Pitt play's Billy Beane and does a nice job, so nice that he earned an Academy Award nomination for best actor.  Like the A's in the movie, Pitt didn't win it all either, losing the Oscar to Jean Dujardin.

The movie starts off at the end of the 2001 ALDS, as the A's lose to the Yankees.  The team is then gutted by free agency, unable to hold on to stars Jason Giambi, Johnny Damon and Jason Isringhausen.

While meeting with the Indians brass in Cleveland to discuss trades, Beane meets Peter Brand, a Yale-educated economics major that serves as an assistant to GM John Hart.  Beane is impressed with Brand's ideas on what makes a player valuable to a team and brings him to Oakland to serve as his assistant GM.

The two use Brand's ideas to rebuild the small market A's.  After a slow start, some changes are made to force manager Art Howe to use the roster the way it was built.  The team starts winning and in September runs off an AL record 20 game win streak.  The A's win the AL West, but again fall in the ALDS.

Though based on a true story, the movie, like most historical movies, is not 100% accurate.  In fact, the second lead character, Peter Brand, is fictional, based mostly on Paul DePodesta, who was Beane's assistant, though he started with the A's in 1999.  Several more factual errors are found here.

Despite the inaccuracies, its still a good baseball movie and if you haven't seen it, you should.

CUBS CONNECTIONS
As with most of this year's flicks, Moneyball had very few Cubs connections. 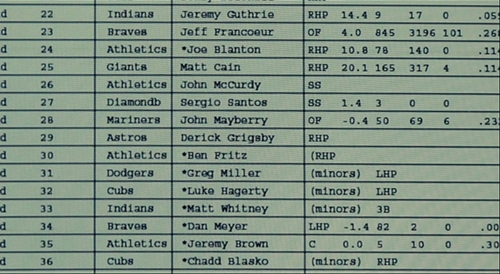 This shot of a spreadsheet early in the movie lists a couple Cubs prospects. 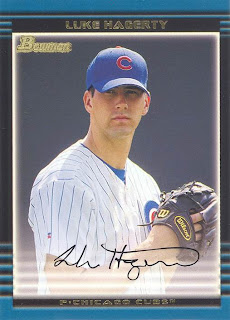 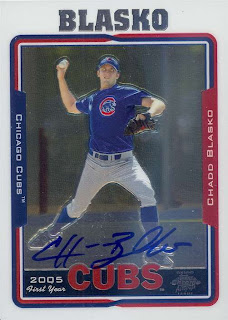 Neither made it to the majors. 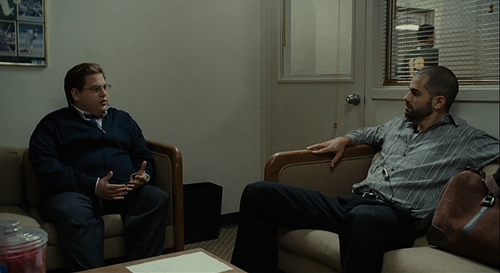 This picture is from the scene where Peter Brand has to tell Carlos Pena he's been traded to the Tigers.  Thing is, it never happened.  Pena was in AAA when he got traded.  Pena spent the 2011 season.... 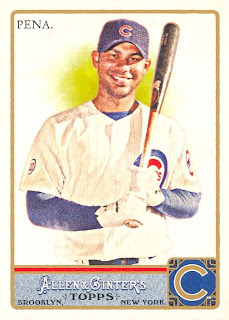 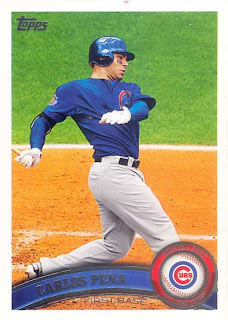 Finally, here is a picture of the A's celebrating their 20th consecutive win... ....look at the far left of the picture and find #48, their first base coach, and future Cubs manager... 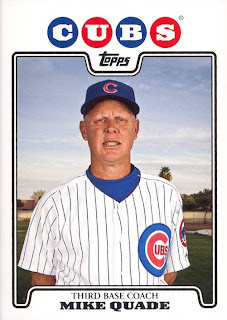