Today's flick is Cobb, which gives us an inside look at the baseball legend. 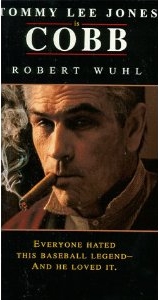 The movie was released in 1994 and directed by Ron Shelton, who also gave us Bull Durham.  The gist of the movie is this: write Al Stump (Robert Wuhl) is hired by a 72-year-old Ty Cobb (Tommy Lee Jones) to ghostwrite his autobiography   Cobb wants to tell his story before he dies.  As he gets to know Cobb, Stump realizes he can either write Cobb's book, a sanitized story of the Hall of Famer, or tell the unflattering truth about the racist, obnoxious jerk that Cobb really is.

In the end, Stump goes with Cobb's version of his life (My Life in Baseball: The True Record) which was rushed into publication two months after his death in 1961.  Years later, Stump writes his version of Cobb (Cobb: A Biography), on which the movie is based.

I remember when the movie came out, thinking that I should go and see it.  I never did, and neither did anyone else.  The total gross for the movie was barely $1 million.

Now for the ironic plot twist:  Author Al Stump, who was afraid to publish a book on Cobb that didn't tell the truth, was in fact, a fraud himself.  In the years since the book and film release, it's come out that Stump, who had permission to take a few things from Cobb's house after his death, took much more than he should have.  Many of the items he sold for a handsome profit.  It also turns out that some of the things he sold were fakes, include a fake Cobb diary.

That means that much of what he wrote, and much of what the movie is based on, may just be a part of an authors imagination.

Things like...
....the movie shows Cobb's daughter refusing to see him.  In fact, she was at his bedside when he died.
....Cobb was a horrible racist.  The movie Cobb said some horrible things as an old man, while the actual Cobb had flattering things to say about Willie Mays, calling him the only ballplayer he'd pay money to see.

A movie that purports to show the real Cobb, is in fact, a work of fiction.

CUBS CONNECTION
In the movie, there's none.  We see very little baseball action.  In real life, Cobb did face the Cubs in the 1907 and 1908 World Series... 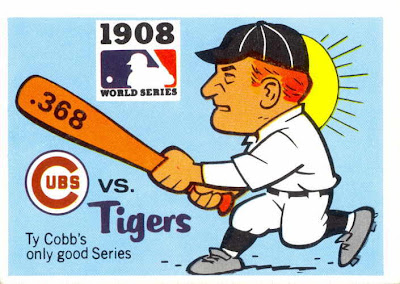 ....this card highlights how well he did, but neglects to mention that Cobb and the Tigers LOST the World Series to the Cubs!
Posted by Wrigley Wax at 9:00 AM