Alex, We Hardly Knew Ya

It's been a whirlwind week with the Cubs for Alex Burnett. 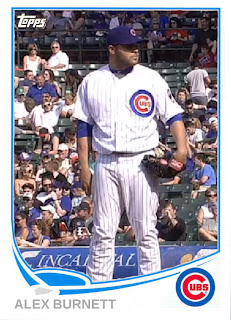 The Cubs claimed the pitcher off of waiver from the Orioles on May 28.  He hustled to Chicago and got there in time to suit up for the game on the 29th against the White Sox.  The Cubs had a comfortable 9-3 lead going into the ninth, so Dale Sveum put Burnett in to finish the game.

He had a fairly uneventful inning, giving up a harmless one out single, but retiring the other three batters.  Seemed good enough.

After the game, he was sent to AAA.

Then a few days later, on Saturday, the Cubs put Rafael Dolis on the DL and a roster spot opens up.  Does it go to Burnett?

Nope.  Instead, Blake Parker gets the call.  But Parker isn't on the 40 man roster.  To clear a spot, the Cubs designate Alex Burnett for assignment.  Thus ends the one day Cubs career of Alex Burnett.

This card commemorates his one and only appearance in a Cubs uniform and he ends his time with the Cubs with a perfect ERA of 0.00.

Pictures of him from the game were scarce.  I did find one at Getty, but it has all the Getty watermarks.  What I ended up having to do was play back the game on MLBTV and take a screen shot.  The picture isn't super clear, but its the best I could come up with.
Posted by Wrigley Wax at 9:00 AM