A couple weeks ago there was a thread on the Freedom Card Board forum about the 1982 K - Mart MVP set. I very clearly remember being at KMart one day in 1982 and buying the set. 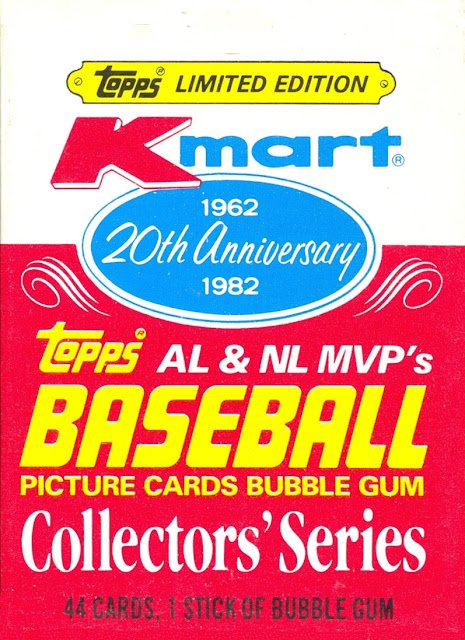 KMart and Topps collarborated with one another to make the set, which was released as part of KMart's 20th Anniversary celebration. It was a 33 card boxed set that featured all of the MVP during KMart's existence, from 1962-1982. 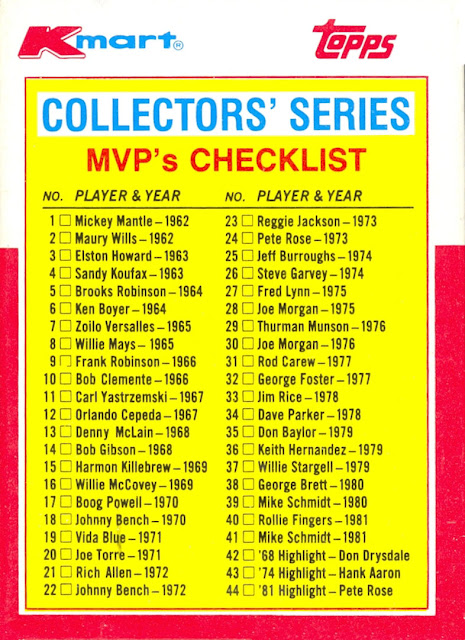 Being an MVP set, it featured some pretty big names. But what really caught my eye was the "Limited Edition" label on the top of the box. A year earlier I purchased the initial sets of Donruss and Fleer. Between those to sets and now this "Limited Edition," in 20 years I was going to be able to pay for my kids' college via the baseball cards savings program.

Twenty years later, when my kids did go to college, the Fleer, Donruss, and KMart cards wouldn't even have paid for a text book! So much for the baseball cards savings plan.

In fact, according the the forum post, at least a million of these sets were made---not exactly "Limited" in my mind! 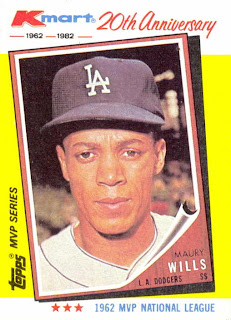 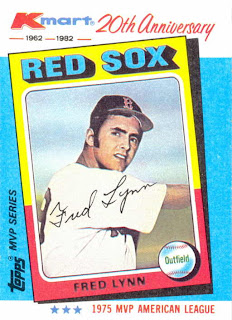 These two cards are probably my favorites. Topps had to create both of them...Wills wasn't under contract with Topps in '62 and Lynn was on a '75 Rookie Card. Topps actually did a better job making these look like authentic cards than they did with Heritage a couple years ago or when making the '75 minis in the 2011 Lineage set.

Even today, the set can be found for about $2, which is what KMart was charging 31 years ago.

The set never gained much in financial value, but it has given me inspiration for my next collecting quest. More on that tomorrow.