I've got 11,567 Cubs cards from 81 different brands listed on a spreadsheet. A random number generator picked five cards, one each from the past several decades. 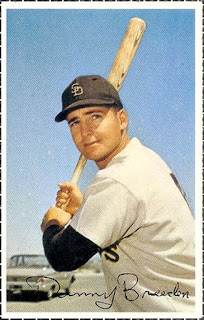 1970s: 1971 Dell Today's Cubs Danny Breeden  Yes, this really is a Cubs card.  It comes from the Dell Today's 1971 Chicago Cubs sticker book.  Six of the 24 Cubs in the book are shown in the uniform of a different team.  But what's even better about the Breeden card is the car in the background.  It looks like they took the picture in the parking lot.  Breeden played in 25 games during the 1971 season and hit only .154.  His brother Hal was also on the '71 Cubs, marking one of the few times in team history that brothers were on the roster at the same time. 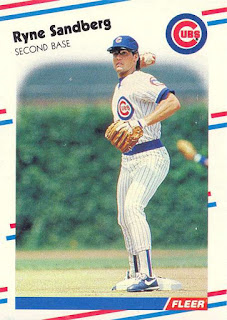 1980s: 1988 Fleer Glossy #431 Ryne Sandberg  I like the design of the '88 Fleer set.  The blue and red stripes match nicely with the blue and red in the Cubs home uniform.  The highlight of the '88 season for Ryno was probably winning his sixth straight Gold Glove.  He became the first second baseman to do that.  He also made the All Star team for the fifth consecutive year. 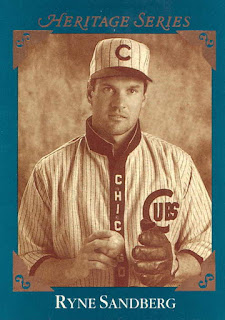 1990s: 1992 Studio Heritage #1 Ryne Sandberg I've got more cards of Ryne Sandberg than of any other player in my Cubs collection, so mathematically, it's not unusual that the RNG picked a second card of his.  And boy did it pick a beauty!  The card is from Studio's Heritage insert set.  The players were all photographed in vintage uniform.  Ryno's wearing a 1908 uniform, plus he's got a mitt from that era.  Very nice looking! 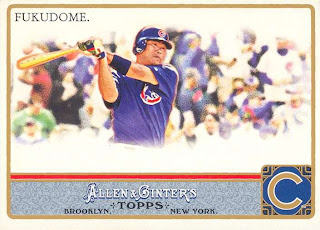 2000s: 2011 Allen and Ginter #207 Kosuke Fukudome  Coming off a beauty of a card with the Studio Sandberg, the final card is a real dog.  First, A&G cards should never be horizontal....vertical only please.  And second, Fukudome was a very expensive bust, and I'd rather forget his tiime with the Cubs.  The 2011 season was his last in blue, and it only lasted half a season.  The Indians picked him up near the trade deadline.
Posted by Wrigley Wax at 9:00 AM