My main stash of series two hasn't arrived yet, but I did pick up a couple extra Ernies for the player collection. 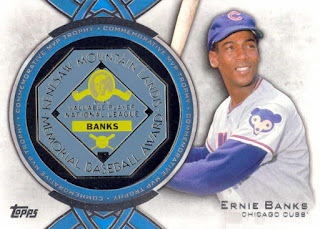 This is from the MVP Winners insert set.  Ernie is the only Cub among the ten players on the checklist.  Mr. Cub was the NL's first two consectutive time winner, earning the award in both 1958 and 1959. 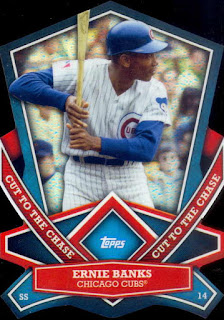 Ernie also get to Cut to the Chase.  Ryne Sandberg made the 25 player list in Series One and Ernie shows up among the 25 in Series Two.  The cards got a pretty well-used picture of Ernie from 1969.

I hope to have my series two stash within a couple days, but I won't be posting anything for a while. Mrs. WW and I are away for a week, just the two of us, celebrating our 30th anniversary.  I've got posts scheduled, but won't be adding anything new until we get home.
Posted by Wrigley Wax at 9:00 AM