I'm starting my series on the Topps retailer boxed sets by looking at the drugs store chains.  With each of these reviews, I'll have pictures of the front and back of each box.  The backs are especially helpful since they have a checklist.  I'll also show any Cubs in the set, both the front and the back of the cards.  I don't normally show card backs but will with these since many of you may not have seen these cards before, front or back.

Growing up in Chicago in the '70s meant one of two drug store chains...Walgreens or Osco.  They were the big players in Chicagoland back then and still are today.

Topps didn't partner with either of them though.  Instead, it was two unfamiliar (to me) drug store chains, Rite Aid and Revco.  I'd never heard of Rite Aid until we moved here to Sturgis, where we have a Rite Aid store (Walgreens moved to town a few years later, and the two family owned pharmacies bit the dust.). 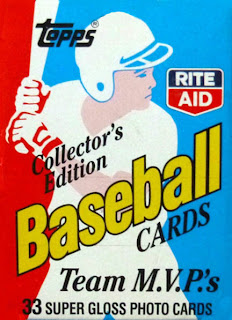 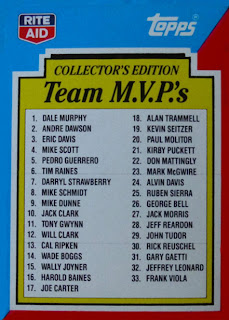 Here's the front and back to the 1988 Rite Aid card box.  With Topps. they put out a Team MVP set.  There is one card for each of the 26 teams, featuring that team's best player (according to Topps, at least).  The other seven cards have a second MVP from each of 1987's division winners and the ALCS, NLCS, and World Series MVPs. 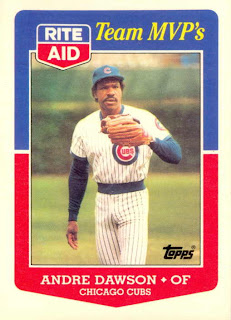 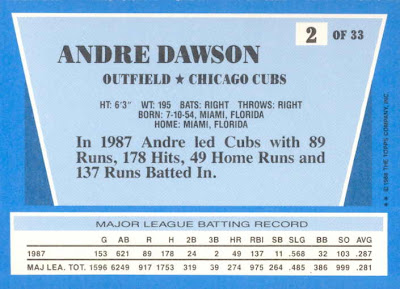 Andre Dawson, who was the NL MVP in 1987, was the obvious choice for the Cubs.

On to Revco....a store that I never heard of or ever set foot in.  The chain was mainly located in the east and southeastern parts of the country.  The chain went into bankruptcy in 1988, the same year their one and only Topps set was made.  It emerged from its financial woes and grew again, but the investor that helped see the company through bankruptcy, Sam Zell, pressured the company leadership to sell.  Eventually the chain was bought out by CVS, which at the time was only half the size of Revco.

In a Cubby related note, Zell did a similar thing with the Tribune (and the Cubs) as he bought Tribune Company and then sold the Cubs to the Ricketts family. 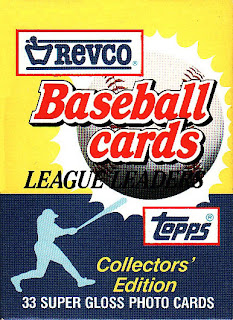 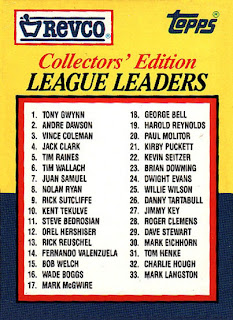 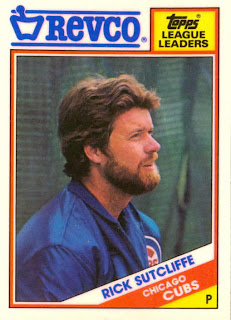 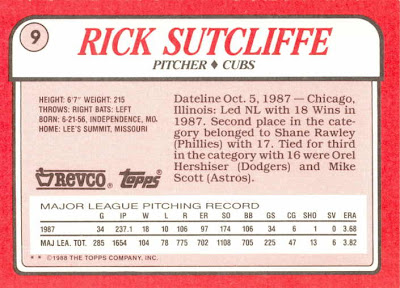 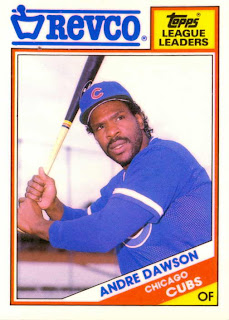 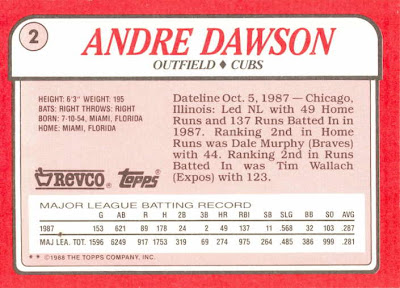 ....and Andre Dawson, the NL leader in home runs and RBIs.
Posted by Wrigley Wax at 9:00 AM