After issuing its first Champions set in 2003, Donruss took a year off before bringing the brand back in 2005.  They should have taken more time off, because what they came up with was not very good.

This was one of the last sets Donruss released before losing their MLB license as it came out in December, 2005.  So strike one against the set is that all of the stats listed on the card are from 2004 and over a year passed since that season before the set came out.

The set was increased in size over the previous Champions set, coming in with 450 cards.  But, strike two, several players have multiple cards. Among the Cubs  there are two cards of Derrek Lee and three of Sammy Sosa.

The 2003 set tried to create some sort of connection between the players and being a champion.  Strike three--the 2005 set doesn't even try.  These are just baseball cards under the brand name Champion.

Worst of all, strike four, is the design of the cards, at least the base cards. 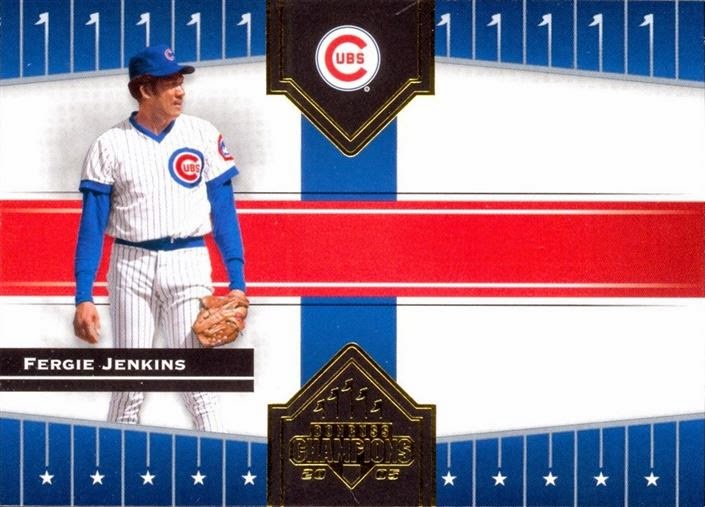 This could be an OK design, except for the blank spot on the right side.  The base card was designed with relics and auto stickers in mind. 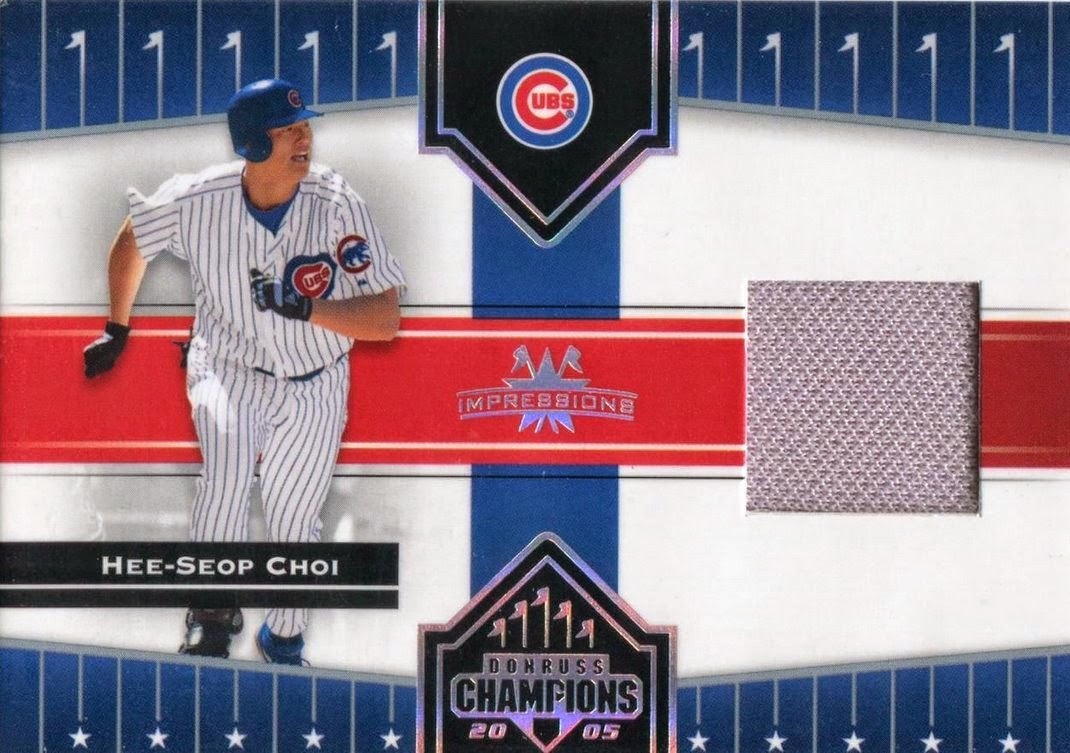 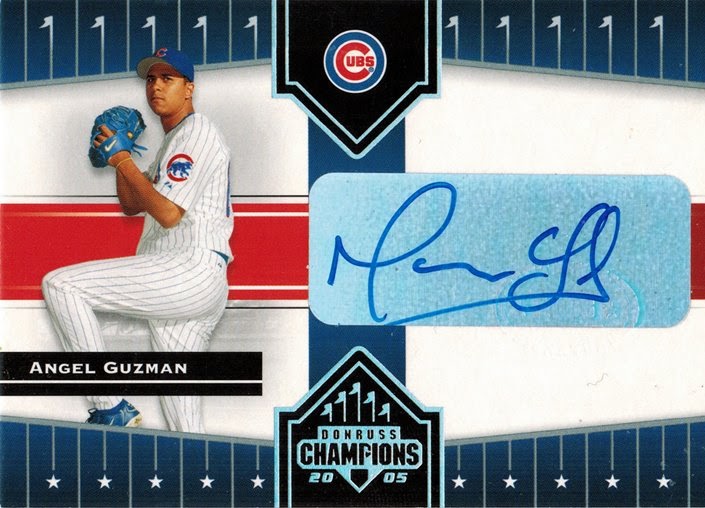 For those cards, the design is fine.  But the base cards look silly with that dead space.

The Cubs netted 18 cards, though that represents 15 players, with Lee and Sosa getting multiple cards.

The set did have many more retired Cubs than in 2003.  I'll lead off with those: 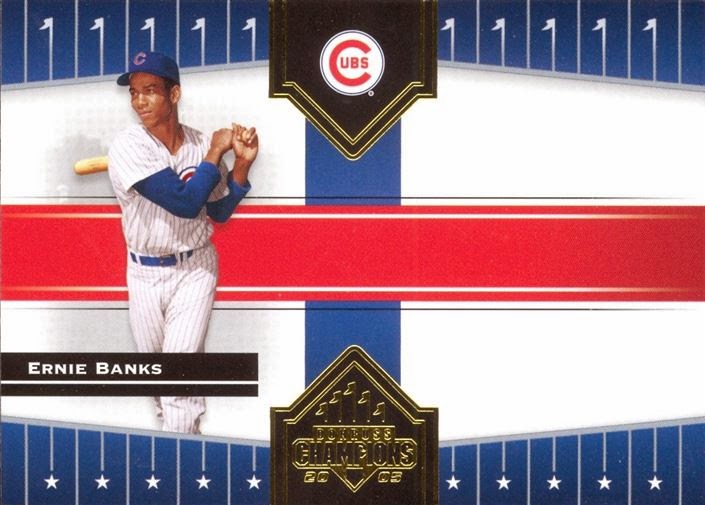 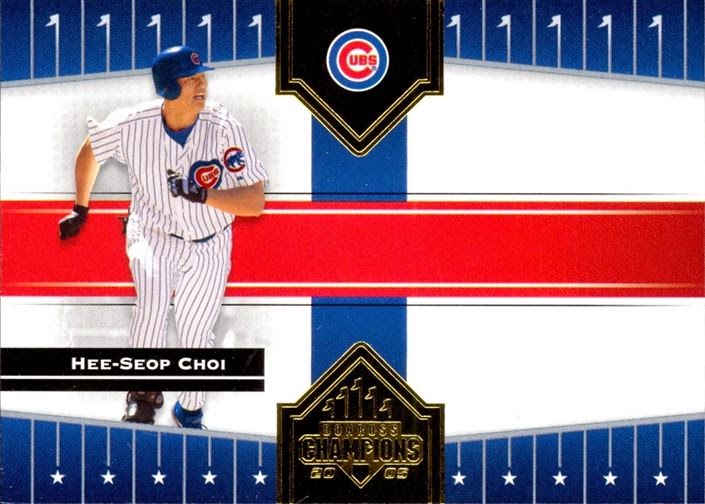 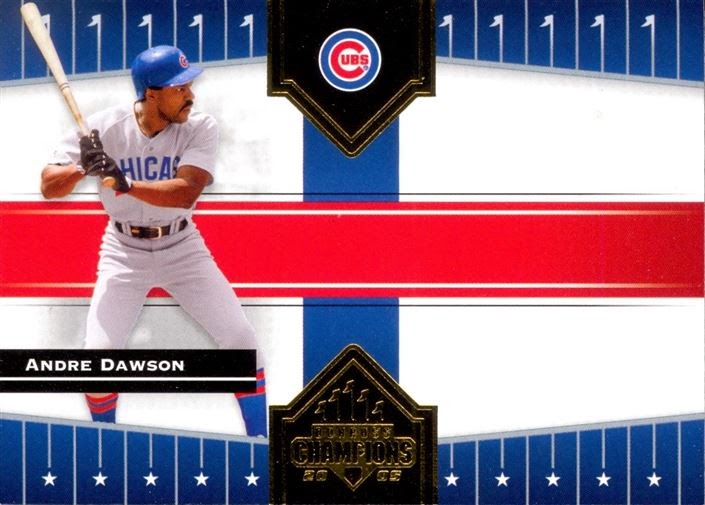 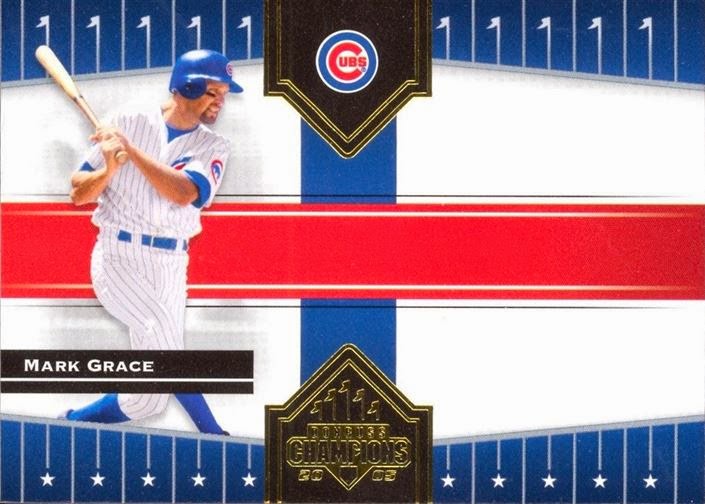 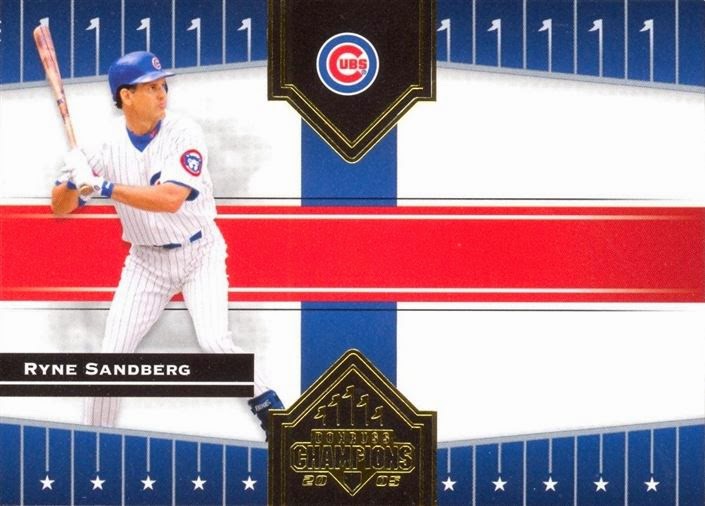 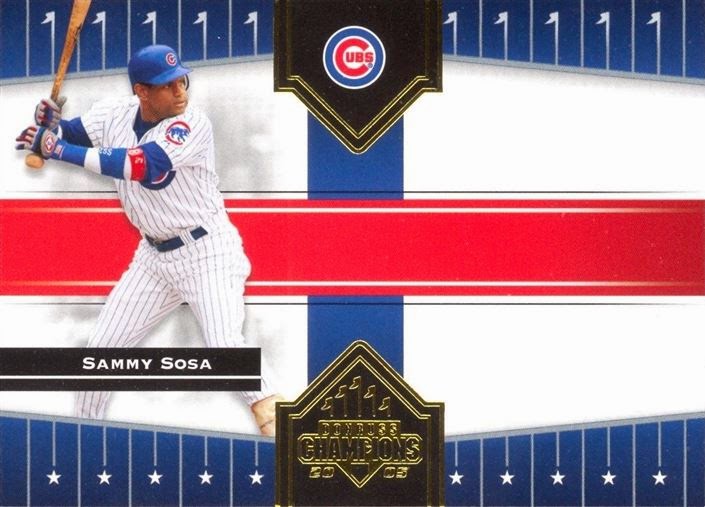 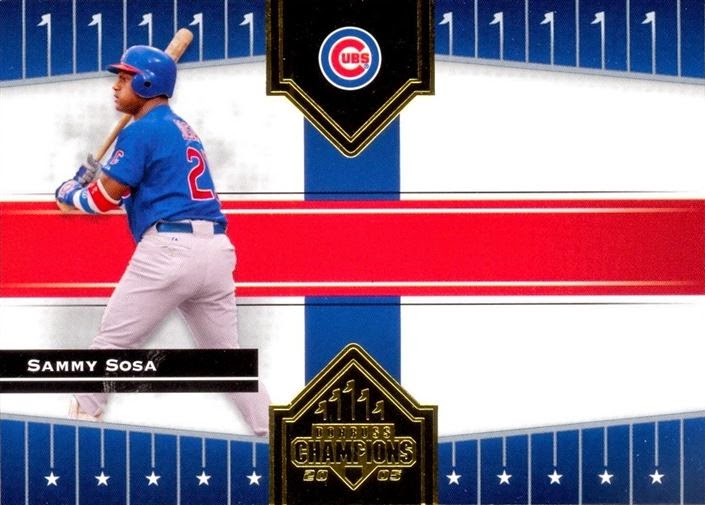 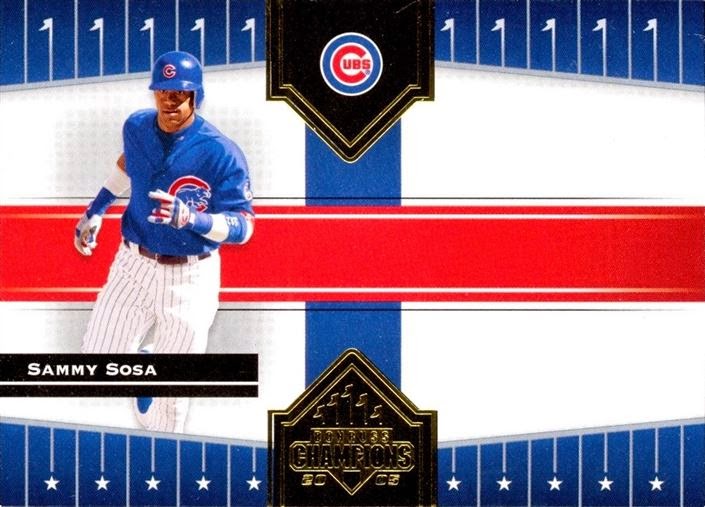 A couple things to point out....Sammy was an ex-Cub when the set came out in late 2005.  He was traded to the Orioles before the 2005 season began.  Even odder was the inclusion of Hee-Seop Choi as a Cub.  He went to the Marlins before the 2004 season, almost two years before the set came out.  The back of the card has his 2004 stats and list the Marlins and Dodgers as his teams.  I've got no idea why Donruss has him with the Cubs.....Andre Dawson looks very cool in his 1948 throwback uniform.  That was from June 21, 1992 when the Phillies turned back the clock.

Here come the active players for the Cubs. 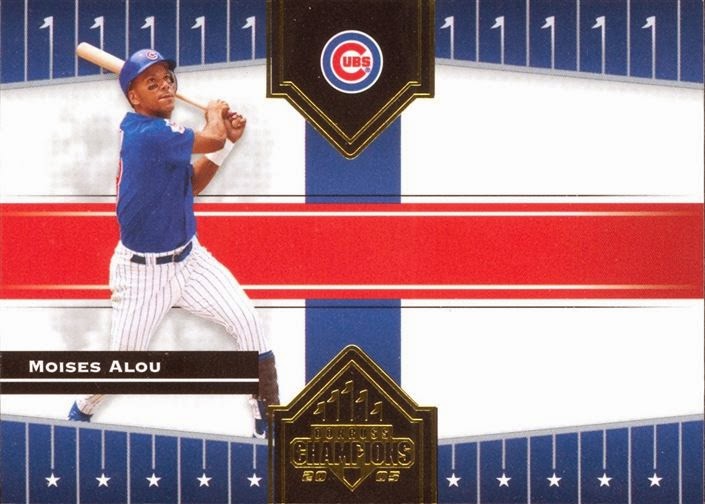 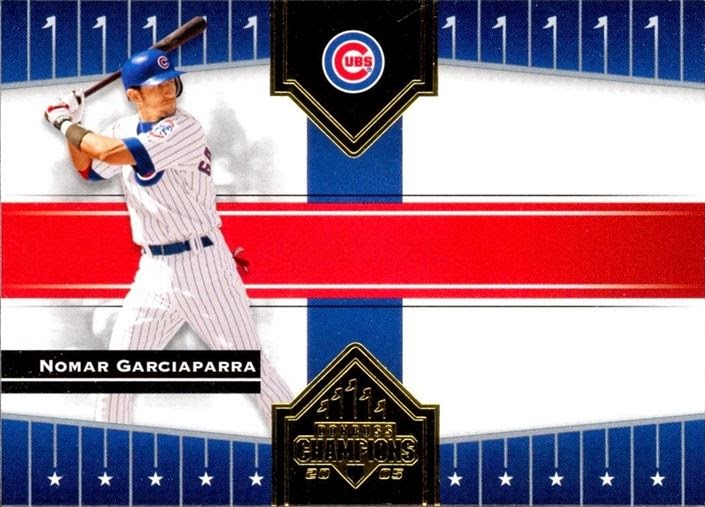 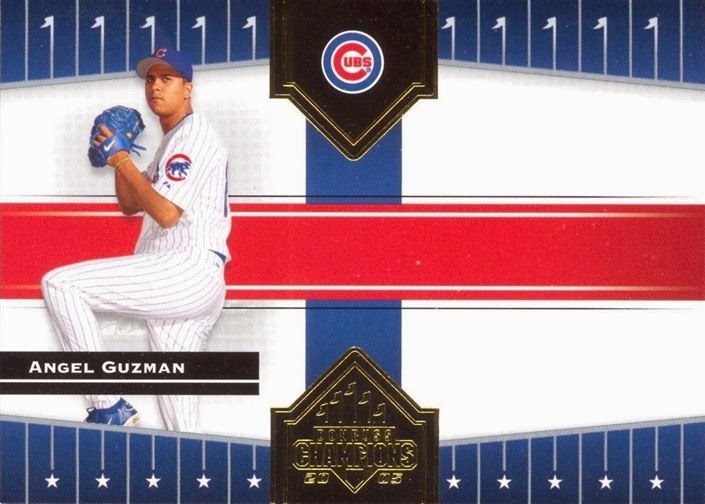 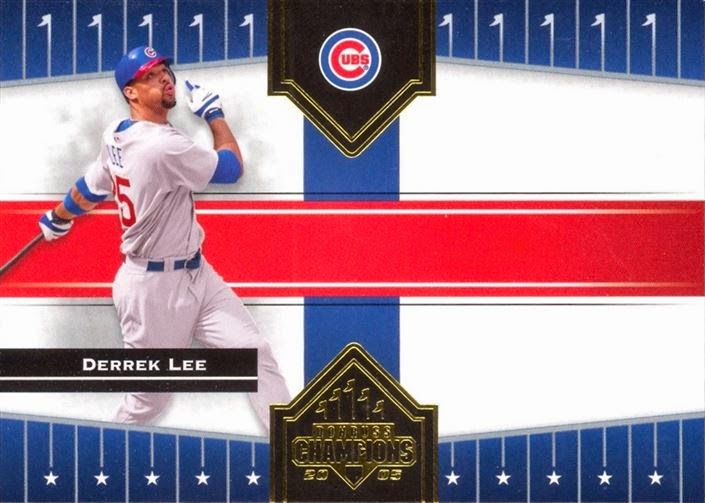 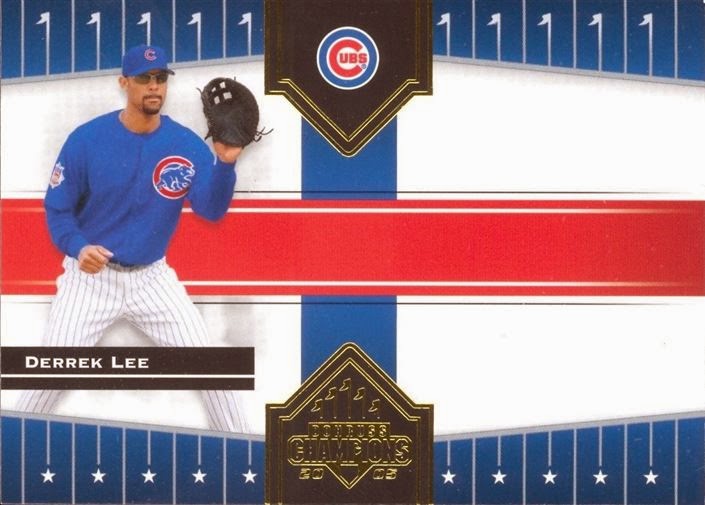 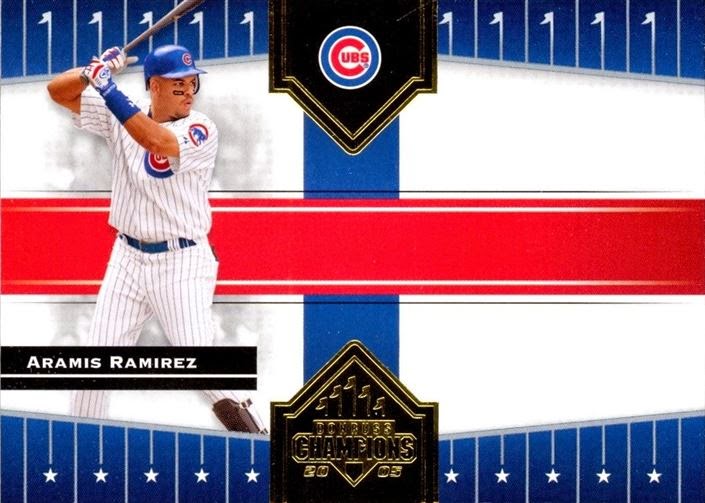 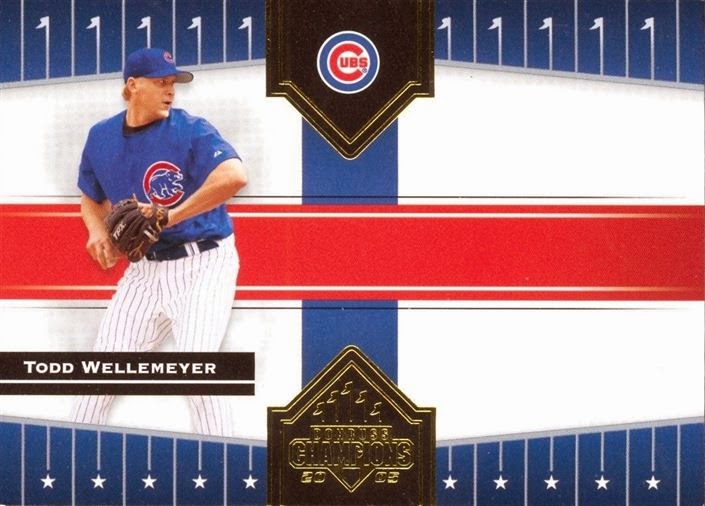 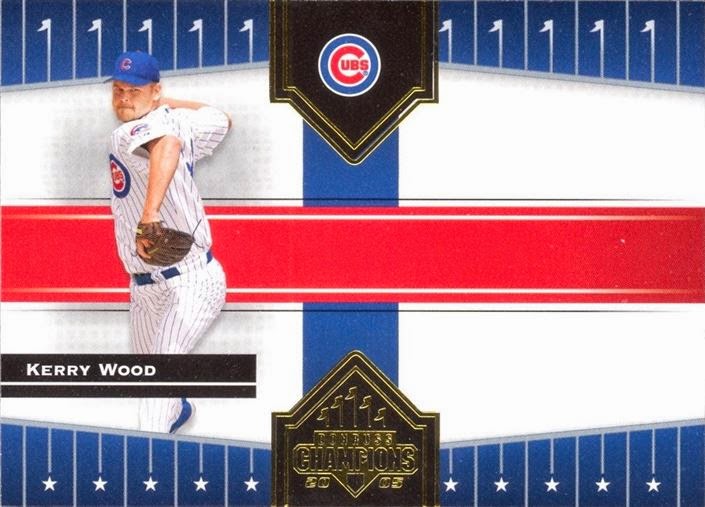 Two starting pitchers are missing...Carlos Zambrano and Greg Maddux.  Maddux was included in the set as a Brave even though the Cubs signed him in the spring of 2004, twenty months before the set was released.

I have to wonder if this was just something Donruss slapped together, knowing that they wouldn't have a license any longer....a sticker and relic dump.  It doesn't really seem like they put much effort into the product.