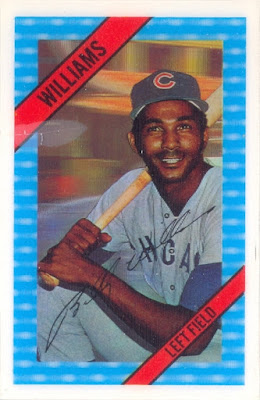 I've had the 1972 Kellogg's card for at least ten years.  What I was missing was the variation card.  I've been looking on eBay for a reasonably priced one all that time, but never had any success.  On a lark I decided to see if CheckOutMyCards had one.

Not only did they have one, but the price was right, too.  I placed my order and then got mad.  This was October 7.  The confirmation email said that the estimated shipping date was January 11.  I know that there is a pandemic, but three months???

I've bought stuff from COMC recently, but always through their eBay store.  Those cards shipped within a couple of days.  For some reason, the Billy card wasn't on eBay so I had to buy it from the COMC website.  Seems like they take care of eBay customers right away.  eBay won't allow them to delay their shipping. Their website customers get moved to the back of the line.  I guess I should be thankful that it took just two months instead of the estimated three for the card to ship out. 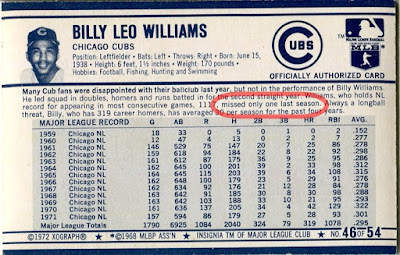 Here's the back of the card and I've got the variation circled.  The line says Billy missed only one game last season, but that is incorrect.  He missed five games in 1971. 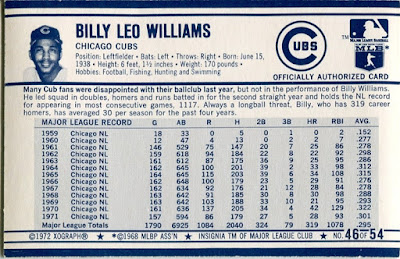 Here is the corrected version, which just took out the incorrect information.  The corrected card is more common making it cheaper and easier to find.  I waited over ten years for my error card, so I supposed waiting two months for it to arrive is par for the course.