All I've Got of Him: Kyle Schwarber 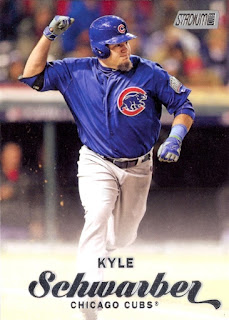 The Cubs non-tendered Kyle Schwarber late on Wednesday.  They left open the door to re-sign him, but more than likely his time with the Cubs is over.

His run started well.  He tore his way through the minors and was with the Cubs a little more than a year after he was taken by the Cubs in the first round of the 2014 draft.  He hit 16 homers in just 69 games and had that legendary video board homer in the playoffs.

A knee blow-out in the second game of the 2016 season put him on the shelf until the World Series.  He hit .412 in the series and started the rally in the 10th inning of game 7 with a single.  The sky was the limit for him.

Unfortunately, it wasn't the sky that was the limit, it was his inability to make contact.  Schwarber became an all or nothing hitter... home runs or outs.  A career average of .230 doesn't cut in, so he was cut.

He'll always have a warm spot in the hearts of Cubs fans (including this one) because of his World Series performance.  It's just too bad that he couldn't follow that up with the same amount of success.

My collection includes a total of 166 Schwarber cards.

The breakdown by brands is