I went on a sticker binge a year and a half ago.  I picked up all the Cubs in Red Foley and Panini, to go along with the Topps and Fleer stickers I already had.  But a few weeks ago I saw a listing for a sticker set I never heard of, called Pro Stamps.

The Pro Stamps set came out in 1996 and was made by Chris Martin Enterprises of Shawnee Mission, Kansas.  Each of the 28 teams had a sheet of six stickers, five players and a team logo.  The stickers were made to look like postage stamps.  Martin spared no expense as he had both an MLB and Players Association license.

The company also put out sets for the NFL, NBA, and NHL in 1996.  The guy went all-in.... and apparently lost.  The 1996 are the only ones made by Chris Martin Enterprises.

The two biggest names with the 1996 Cubs were Ryne Sandberg, Mark Grace, and Sammy Sosa.  Grace and Sosa had stickers while Sandberg did not.  My guess is that the company had an early print deadline.  Sandberg had retired during the 1994 season but announced in in late October, 1995, that he was coming back.  They must have had their lineup already set or maybe they didn't have access to any old photos of Sandberg.

The other Cubs in the set are Shawon Dunston, Brian McRae, and Jaime Navarro.  The inclusion of Dunston with the Cubs is another indication of an early print deadline.  He became a free agent after the 1995 season and signed with the Giants in January, 1996. 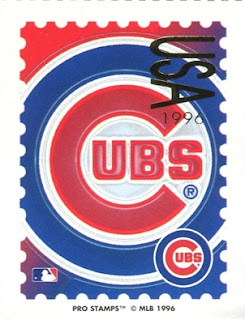 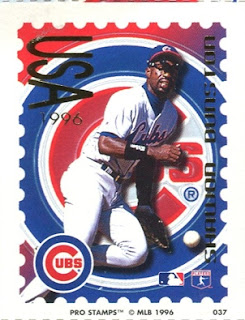 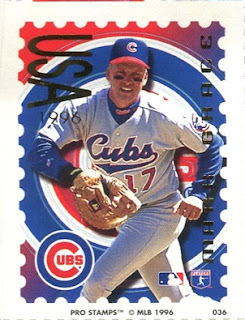 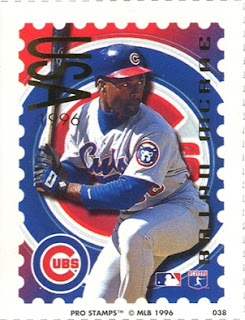 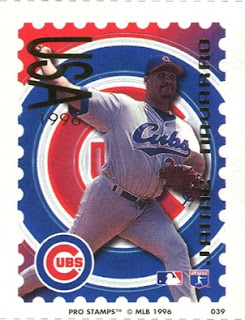 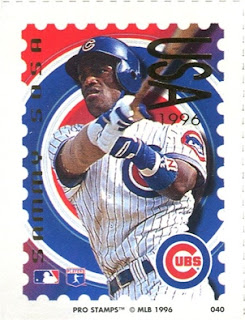